The successful career in cycling permits me to come into contact more easily with the athletes of today and better confront with their needs.

In 2003, I became team manager of the team Vini Caldirola, with whom we won the team world ranking and since 2004 I formed my own team: GM BIKES SA .

With the team I got over 200 wins as General Manager, obtained in all the Continent. Between victories including several stages in the biggest stage races, the Tour de France and Tour of Italy, World Cup and the victory in the overall classification of the Vuelta a España 2011 with Juan Cobo, in addition to the victory on  the team classification. The teams that I led, have been consistently among the best ten of the world.

GM Bikes SA, in addition to the cycling team, working in the field of sports marketing and consulting and between the customers has had and still has the best companies in the world in the area of the loop, Merida, Scott, Fuji, Champion System, Giordana, Castelli etc.. as well as multinational companies who have chosen cycling to promote their brand, Geox, Saunier Duval, Vaillant Group, American Beff etc.

In 2003, I was a member of the CEO of the World champions Chips MTB in Lugano-Rivera.

Since 1997, every year we held a two day cycle open to all, in honor of Mauro Gianetti, named Gianetti day. One day is dedicated to children from 3 to 15 years, with courses of skill and fun, with 400-500 young participant every year,   and a day dedicated to all with trails for families, professionals and amateurs, with 1’500-1’800 participant every a big bike party for 3’000 people between participant and accompanying person.

After having obtained all the results that I could achieve as a sportsman and as General Manager, I have the desire to give something more, because I have learn,  give hope create the greatest emotions.
For this reason, I created the Recycling the World, an organization that combines sport and social, with which I have done two major projects.

In 2007 with the Association  “ReCycling The World”, aimed at supporting environmentally and socially. In collaboration with Saunier Duval and the cycling team and was made ​​the project “One hundred years for a million trees“ that led to plant a million fruit trees and other trees in Mali, creating over 200 jobs, both for the creation of nursery water wells.

For this project have been congratulated personally by Vice President of the United States Mr. Al Gore 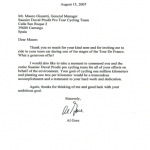 With the project  “Ticino school for the world“, also on the ReCycling the World association,  in collaboration with the company  Prodir and the schools of the Canton Ticino, through the recycling of pens produced in excess by the same Prodir, we have let produce in Africa more than 15,000 school kits, while creating another 25 jobs. In the context of the two projects were held two cycling races of solidarity in Africa, in Bamako and Mopti.

In 2008 I have received the honorary citizenship of Fatoma, Mali, to support economic, social and ecological led by his association in the area along the Niger.

Companies with whom we have collaborated